I came to know about Ju Kee Charcoal Roasted at 46 Holland Drive coffeeshop by chance. The stall previously was the famous Red Ring Wanton Mee which I loved. Then one day, when I went back, I found that there was a change of hand.

Usually, I would make an initial assessment by the look of the char siew (Chinese barbequed pork) and roast meat, by their colour and texture. Theirs did catch my eyes.

I must say, I wasn’t disappointed by their char siew which they roast in house. The plate of noodle came with a generous portion of char siew. It was not too sweet.

Being health-conscious, I had requested for leaner char siew. It still had the right amount of fats to give it a certain degree of tenderness. You may choose their translucent melt-in-the-mouth char siew.

Apart from the char siew, the key determining factors of good wanton mee are the noodle, wanton, sauce and chilli.

The texture of the noodle was okay for me. Though it didn’t have the ‘kansui’ (枧水lye water, alkaline solution) taste to it, I found it a bit too soft or overcooked. I preferred a certain springiness to the bite, but it did fall short. 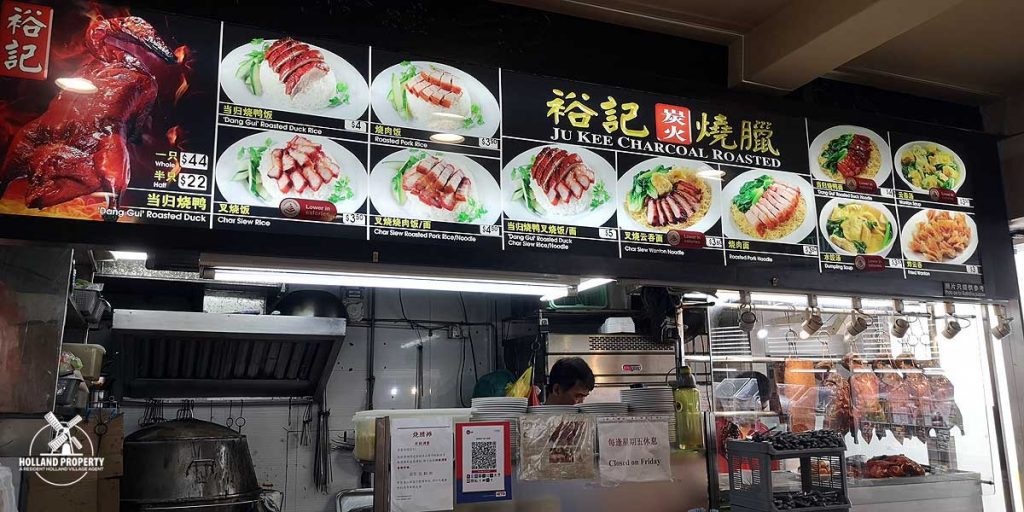 The wantons were flavourful, but the meat fillings were too little. That seems to be the norm with most wanton mee stalls.

Their sauce is on the lighter side. The small crispy bits of lards were delightful.

As for the chilli sauce, they used the sambal type of chilli which I like, but somehow there was a missing kick to it.

The skin of the roast pork was very crispy. But the slices were too thin and the portion too small. The serving was barely sufficient.

Ju Kee is also famous for its herbal duck (当归鸭). While I could taste the Chinese spices and herbs, it was nowhere close to those I had eaten in JB, such as Restaurant Ya Wang. 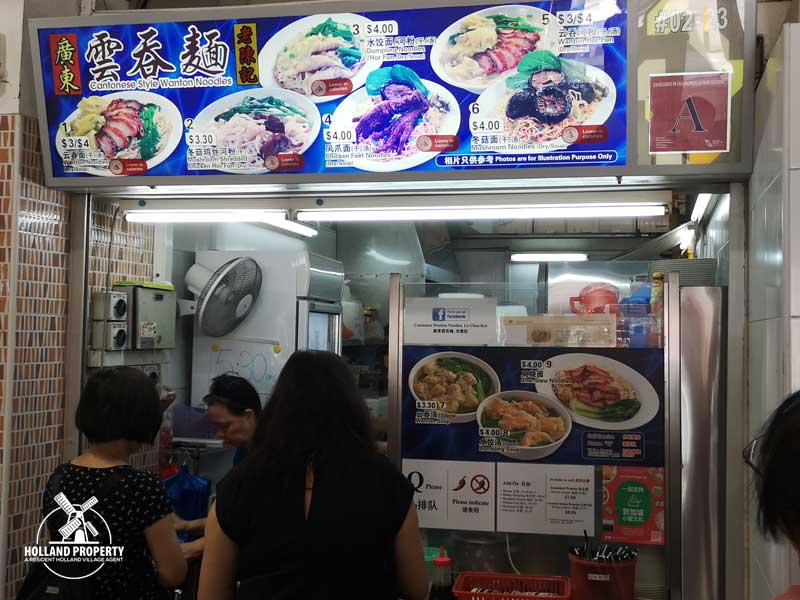 Located in the Holland Drive Food Centre. The queue is usually long, even though several uniformed staff manned the stall.

I ordered the $4 portion which came with extra ingredients. With my first bite, I could feel the springiness of the noodle, but there was a slight ‘kansui‘ taste. 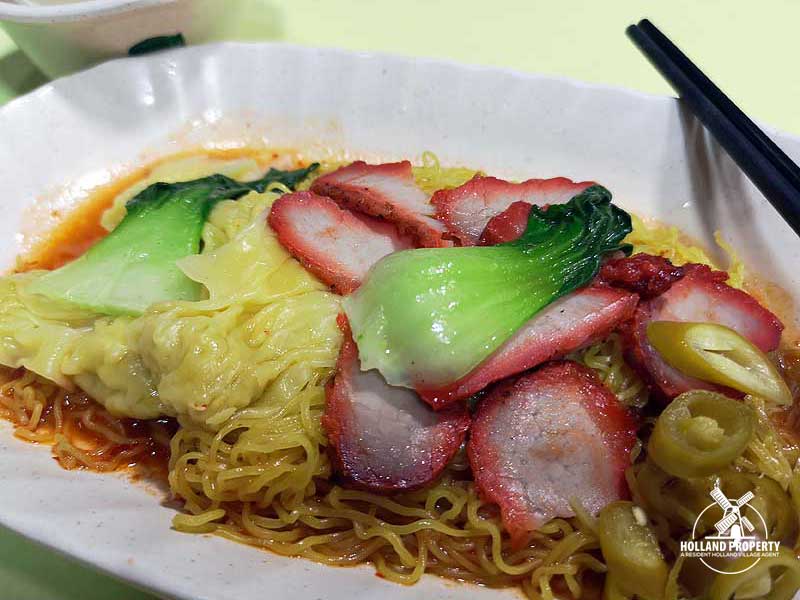 The char siew was too lean and lacking the charred caramelised flavour for my liking.

The wantons were plump and tasty, one of the better ones I have tasted.

The sauce and chilli were a tad too bland for my taste bud. Perhaps more chilli would have helped.

I had their shrimp dumplings before which would make a better choice. They came with a generous portion of prawn, diced water chestnuts and well-marinated minced pork. 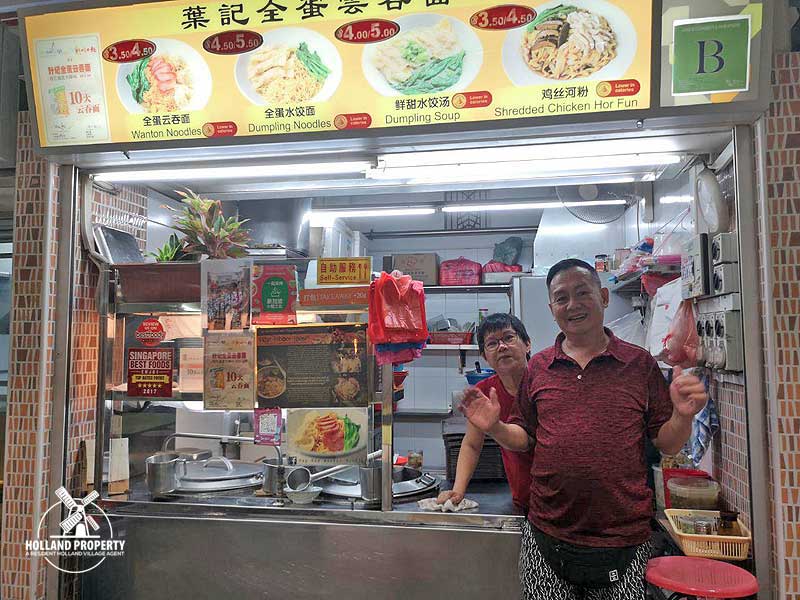 This stall is located right towards the end of the Holland Drive food centre. It is perhaps the most underrated in Holland Drive market, judging from the short queue.

The stall owner, Richard, is amiable and polite. He would invariably say ‘thank you’ after serving you. Richard and his wife were from Batu Pahat. He has an elder brother in JB who was a retired wanton mee vendor, famous for his flying wanton mee in Taman Johor Jaya.

There are two special features about Yap Kee wanton noodle.

Firstly, they serve 100% egg noodles without any tinge of ‘kansui’ taste to it. The basic ingredients of egg noodles are simply eggs and wheat flour without adding water. The texture is tender yet firm, which is what I like. Egg noodles have higher amounts of protein and essential amino acids. They are also lower on the glycemic index. 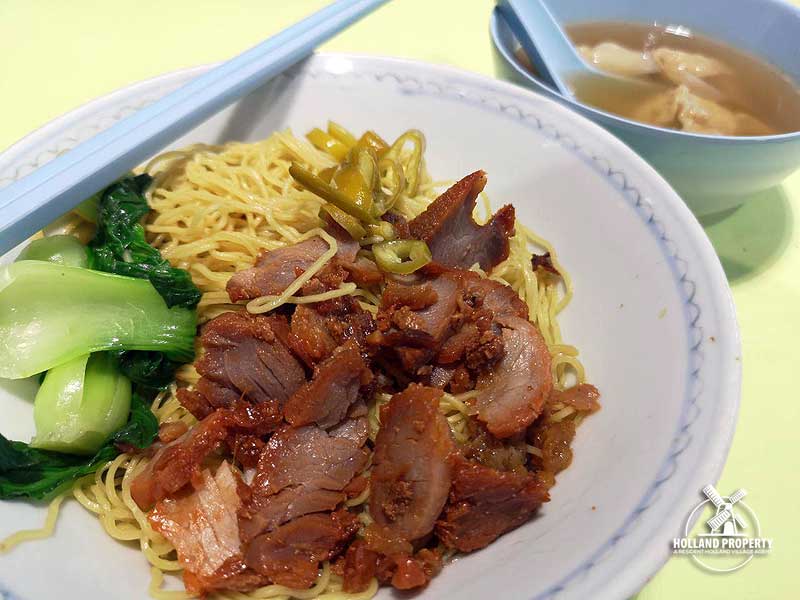 Secondly, you can opt for the “original taste” (原味). It doesn’t use black sauce nor chilli sauce which are optional. Don’t be deceived by the plain-looking noodle.

I remembered eating kempua mee for the first time in Sibu Sarawak many years ago. I was pleasantly surprised by the aromatic taste.

It was the same here. The owners used only some light sauce and lard. You can also opt for shallot oil instead of lard, which is a common feature in Sarawak. I believe that would have tasted even better.

The char siew, though not fat, was savoury. Not the best, but still decent.

I like their wantons best because the fillings were relatively generous and very tasty.