The History of Holland Village:

How it all began….

The British military base in Singapore, located in the nearby Buona Vista Road (present-day Science Park 1), helped shaped the social landscape of Holland Village. It was the go-to place for the military personnel for their recreational and shopping needs. Naturally, the retail outlets in this enclave existed mainly to cater to them.

There were early signs of growth with the constructions of Holland Road market, shop houses along Lorong Mambong and Lorong Liput, and an open-air theatre (Eng Wah Theatre).

Population around Holland Village grew in the 1950s and 1960s, which helped to bring about rapid economic growth. Businesses expanded and flourished as they met the demands of the growing suburban population.

One natural outcome was the need for more housing. Colonial black and white bungalows in nearby areas like Portsdown Road, Dover Road and Rochester Park were highly sought-after. The supplies, however, were far from enough.

Hence, in the 1960s, the Singapore government (or is it the British army?) built the terrace houses in Chip Bee Gardens for the married couples of the British Army. This surge in the number of British at the doorstep of Holland Village boosted businesses in Holland Village tremendously.

Apart from the British, Singapore also enjoyed a diverse expatriate community that was well represented by many western countries.

Along with these schools, they also set up clubs to serve their nationals.

Near Demise of a Golden Era

Just when everything was going on well, on 18 July 1967, Britain announced its plans to withdraw its troops from Singapore by the mid-1970s.

Not long after, they brought the deadline forward to 1971. This decision to pull out came as a shock to Singapore because our army was still in its infancy state.

At stake was not only Singapore’s defence but also the economy. After all, the military bases contributed over 20 percent to Singapore’s gross national product.

By 1971, Britain repatriated almost all the British soldiers, and within another five years, all left. The future seemed bleak.

Then, there was a dispute between Singapore and Britain over the ownership of the estate. Eventually, the Singapore government paid $6.77m to Britain to take over its ownership. 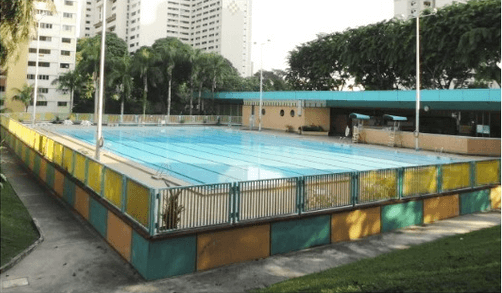 When the government embarked on the development of HDB flats in the 1970s, it set to remould the social landscape of Holland Village.

The ambitious building plan added more than 20 blocks of flats and shophouses. These locals helped to fill in the void left by the British. That saved the day for Holland Village.

Therefore, the post-British era not only did not result in the demise of Holland Village but instead, it grew with new clientele from the new HDB residents and suburbanite from the Holland and Tanglin areas. Besides, there was a growing supply of expatriates from the nearby educational and commercial sectors.

As Holland Village boomed, an Ng family built a new 4-storey shopping centre in the 1980s. This new addition provided a catalyst for further growth.

Business at the Cold Storage supermarket, the anchor tenant, is brisk because it caters to the expatriate community. A Macau casino owner paid more than $61m in 2016 for the 12,260sf space from the landlord.

Lim’s Art & Living is well-loved by the expatriates for its treasure trove of collectibles.

Thambi magazine store, an iconic new-stand in Holland Village, carries possibly the biggest selections of magazines from all over, up to more than 4,000 titles.

Over time, many of the shop owners in Holland Village that were selling furniture, antiques and sundries stopped plying their trades. With the growing demand for eateries and bars, many decided to rent out their shops for good rental income.

Lorong Mambong is perhaps the most vibrant stretch of street in Holland Village. Shop spaces here are so coveted that rental for the ground floor shop alone can go up to as high as $30,000. Even a second-level unit of the 2-storey shophouse can fetch for $10,000.

Shophouses here are rarely available for sale, until in recent years. An owner sold one of these shophouses for $16.2m in 2017 after paying $14m for it merely two years before.

On the other hand, the tenants of the shops facing Holland Avenue are predominantly banks (representing nearly all major banks). Because of rental hikes, some established food chains, like Delifranc, Burger King, KFC and Swensen, couldn’t survive.

Fosters Steakhouse is a must-go where you can enjoy mouth-watering steaks and great renditions of English classics. Try their afternoon high tea with scones, cakes and English tea (of course you can opt for coffee!), just like the good old days of the British army era. 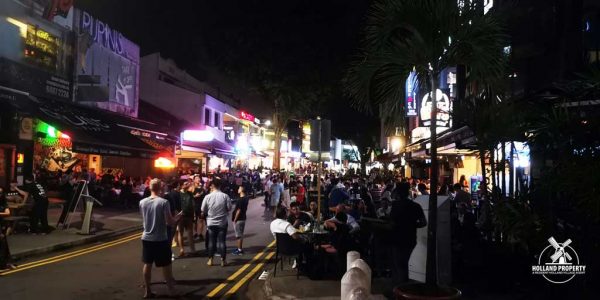 After the 9/11 tragedy, there was much concern about the security of Holland Village, since it is a popular expatriate destination.

As a precautionary measure, LTA installed gantries to seal off parts of the roads from vehicular access.

This move was a blessing in disguise because it transformed Lorong Mambong and Liput into party grounds!

Tremendous progress in the transportation network contributed significantly to the late expansion of the Holland Village. LTA built more public car parks and improved the road network around the area. Then we had the opening of Buona Vista MRT in 1988.

From circa the 1970s, many houses and apartments sprouted in the neighbourhood as developers saw the potential of the area.

Good Class Bungalows (GCB) in areas such as Ford Ave, Leedon, Cornwall are homes to the rich and famous.

At the height of the en bloc fever In 2018, several condos in the Holland Road and Farrer Road areas were sold. When these new condos T.O.P. in a few years, we will see a makeover of the Holland residential landscape.

Today, both the public and private housings in the Holland area are among the most highly sought-after and expensive, for obvious reasons.

Urban Redevelopment Authority (URA) identified Holland Village as one of Singapore’s endearing Identity Nodes and a distinctive lifestyle destination. URA then hatched a plan for a new extension to the existing Holland Village.

In May 2018, in a dual-envelope (concept and price) tender process, URA awarded the project for the commercial and residential site to the consortium of Far East Organisation, Sinoland, and Sekisui House through their tenderer Stirling Land Holdings and company.

So, in a few years’ time, we shall see the dawn of a new era for Holland Village with trendy retail shops, mall, condos and serviced apartments.

The big question is, “Will the new be better than the old?”

Read: Will the New Holland V be better than the old?

INTERESTING FACTS ABOUT THE HISTORY OF HOLLAND VILLAGE

Holland Road probably has nothing to do with the Netherlands, though some believe the earliest settlers in the community were the Dutch.

The name Holland Village was proposed by the Singapore Rural Board in 1929. It is most likely named after Hugh Holland, an early resident, architect and amateur actor. Unfortunately, there is very unlimited information of him.

Lorong refers to an alley, a lane or path. Mambong could be Mampung, meaning porous, cellular, not solid, empty of content (as in jackfruit). Or it could be Mambang, meaning a ghost. At Lorong Mambong, be sure to check out Breko Cafe dishes from all-day brunch to hearty dinner. And award-winning bar from Bali Rumours Bar & Grill.

If you have an urge for Mexican food, hop over to El Patio, arguably the best.

Drinks & Co Kitchen‘s pizzas and platters would also be an excellent dining choice.

Here, you will find a 24-hour spa, Natureland. Parisilk, an electrical/electronic store, is known for its outstanding service and fair pricing.

One of my personal favourites is Nakhon Kitchen, where their Thai street food is authentic and reasonably priced. Be prepared to queue, be it for lunch or dinner, weekdays or weekends!

Another eatery that is worth trying is the new Kota Zheng Zong Bak Kut Teh, which hailed from Johor Bahru. Unlike the local peppery version, you will get to enjoy the Malaysian herbal version.

Holland Piazza sits on the original site of an open-air Eng Wah cinema.

A family bought over the cinema and developed it into a mall in the mid-1980s. The owner has since rebuilt it twice.

Previously it had the iconic windmill which had given way to a more modern dazzling Holland Piazza.

History of the Hakka Cemetery

Since 1887, the Ying Fo Fui Kun clan owns this remnant of the Hakka cemetery, located behind Block 32 Holland Close. It was part of a massive 100 hectares of land, named as Shuang Long Shan (双龙山) or Double Dragon Hill.

The original cemetery and the ancestral hall were established for clansmen from Jia Ying (嘉应) as both a burial ground and ancestral worship place in the village. Chinese often saw the building of cemeteries on top of hills as being highly auspicious.

The ancestral hall houses the ancestral tablets. It was also a school (Yin Sin School 应新学堂), set up in 1926 to provide education for the village children.

Mathematics, music and science classes were conducted in both Hakka and Mandarin.

The school shuttered in 1969 due to falling enrolment.

In 1969, the state acquired all but 1.89 hectares of the land for development. The graves were exhumed and cremated. Hence, what we see today are empty graves.

The ashes are put in urns. They are now both in the original ancestral hall and the new memorial hall which was built in 1988.

After acquiring most parts of the cemetery, the government imposed a 99-lease on the title of the remaining plot. HDB designed this existing cemetery, like rows of flats. 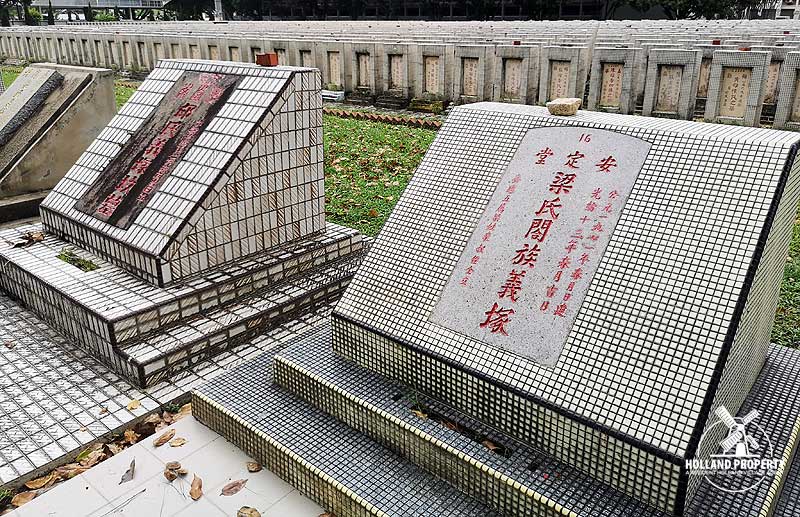 Be sure to check out the food at Holland Village Nasi Lemak.

Check out my top 12 must-try stalls at this food centre.

The Shop That Bucks the Trend

Khiam Teck at 265 Holland Avenue is the only shop that is still operated by the original owner since the 1960s or even earlier. Here you can find cheap toys and party supplies.

The public can rent these houses and shops in Chip Bee Gardens. Initially, JTC was in charge of the management, but later Singapore Land Authority (SLA) took over.

Go to The Butcher to get your meat cuts and sausages and Phoon Huat your baking supplies.

Chip Bee Gardens, however, has far more to offer than just hip cafes and classy restaurants. It is also a lifestyle enclave, with an eclectic mix of creative arts and fashions.

Art buffs may want to visit Taksu gallery, which showcases work by budding talents and critically acclaimed artists, with a focus on art from Singapore and around the region.

Why buy properties in Holland area? 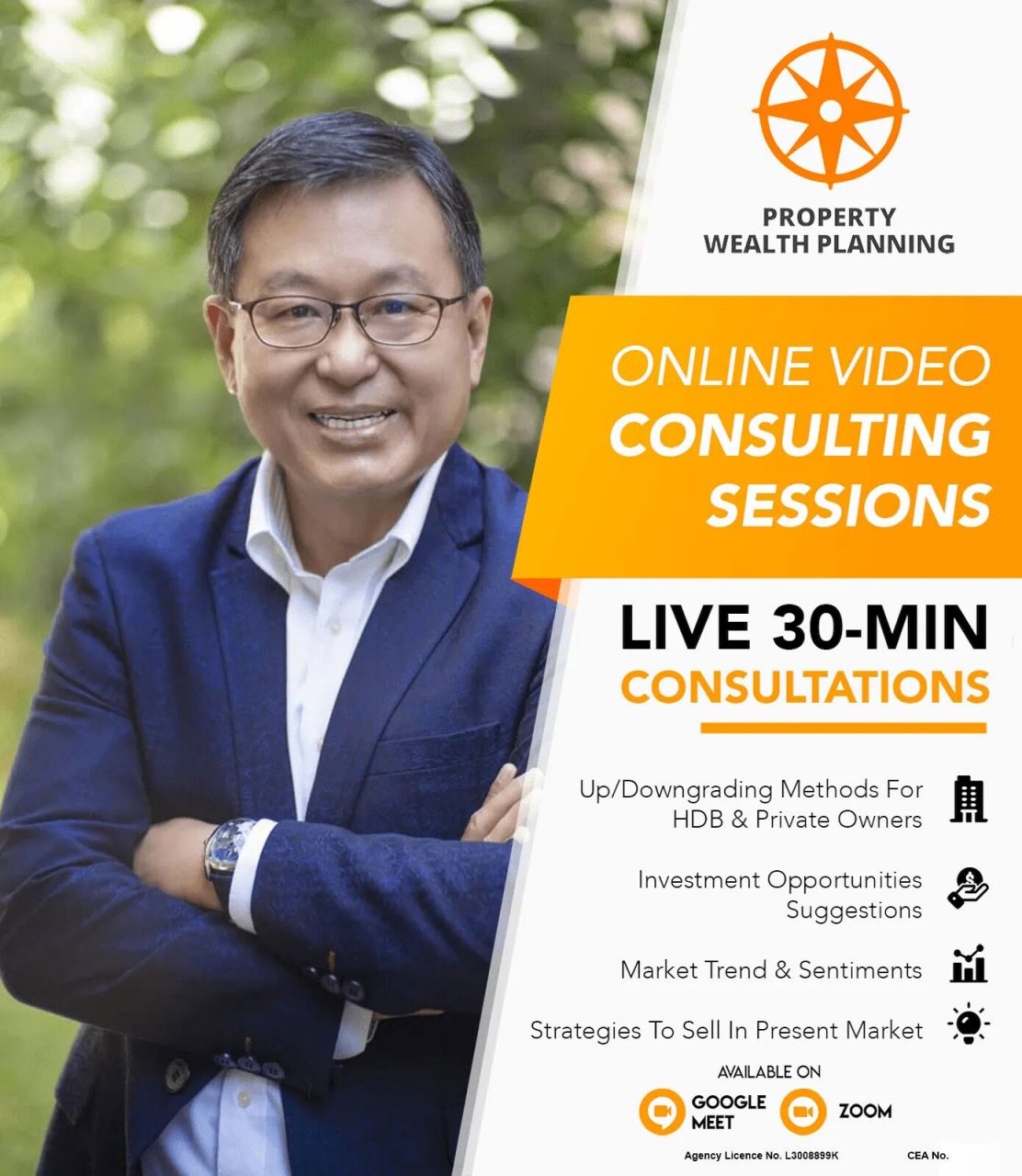