Mooi Residences is the latest new developments to join the rank of a handful of condos that are within five minutes walk to Holland Village. The launch follows on the heels of One Holland Village Residences and Van Holland.

Why did the developer come up with an unusual name ‘MOOI’? What exactly does it mean?

Just in case you are thinking, this is not a Teochew word for a ‘young girl’ (sorry for the lame joke).

Well, since Mooi Residences is in the Holland Road area, it makes sense to adopt a Dutch name. Van (Dutch word for ‘from’) Holland had set a precedent. One Holland Village Residences also adopted the Dutch names ‘Sereen’ (serene) and ‘Leven’ (life) for their residential blocks.

My Ratings on Mooi Residences

There is no new land supply in this area (except for the Government Land Sale for One Holland Village). Developers have very few options except en bloc sales. One example is Van Holland, which is the case for former Toho Mansion.

Lands near Holland Village are scarce, especially big plots of lands. So we only see a number of small new developments sprouting up along Holland Road over the years. The upcoming Hyll on Holland is about 10 mins walk to Holland Village.

I have often received enquiries from buyers who want to buy something within a short walk to Holland Village but found wanting because of lack of supplies.

There are usually not many units available for sale on the resale market.

It is noteworthy all of them have less than 100 units.

Apartments along same stretch of road as Mooi Residences

The biggest condo projects in or near Holland Village are The Merasaga (116 units, 1995) and One Holland Village Residences (296 units, under construction). Both of them are 99-year leasehold.

So, if you are looking for a condo project with more than 100 units that is within 5 mins walk to Holland Village, you don’t really have choices. This explains why One Holland Village Residences is selling well.

With the upcoming launch of Mooi Residences, it presents buyers a rare opportunity to own a brand new unit within a short walking distance to Holland Village.

Wenul Development Pte Ltd is a boutique developer who has several cluster houses and small developments under its belt.

Some of the projects in its portfolio include EstriVillas at Jalan Lim Tai See, Shamrock Villas, Bellaville, Adana@Thomson, The Mercury, RV Suites, Ventura Heights, Whitley Villas and RV Edge. 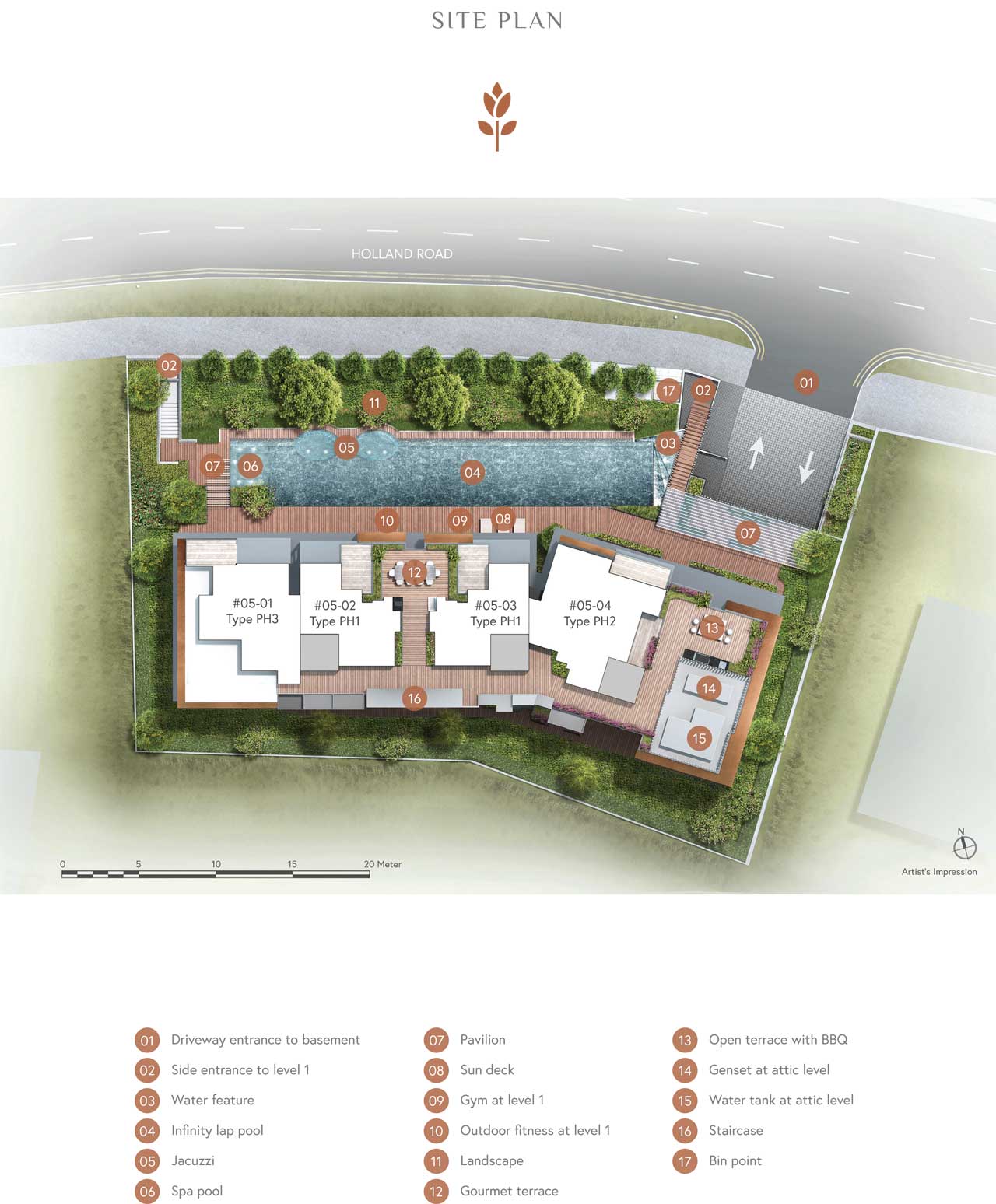 One has to accept the fact that facilities will be limited for a small development like Mooi Residences.

Having a lap pool is almost indispensable, no matter how small the development is. Nothing beats swimming a few laps in the 25-m pool, soaking in the jacuzzi or relaxing in the spa pool to unwind after a long day.

The developer also recognises that a fully-equipped gym is just as indispensable as a lap pool. Despite the restraint of space, a BBQ area and gourmet terrace are also added to the list of facilities.

There are altogether 19 parking lots plus a accessible lot. Since 12 out of the 24 units are three bedrooms and one is a four-bedroom penthouse, they are likely family-based residents who are likely to own cars. The number of parking lots should be sufficient to cater to their needs, assuming those who stay in smaller units are less likely to own a car since the MRT station is so nearby. There is even provision for 6 bicycle lots! This makes sense for those who prefer to cycle to work (eg. One-North is not too far away) or nearby parks.

Layouts generally have well utilisation of spaces with no bay windows and over-sized balconies.

All units have private lifts except the ground floor units. 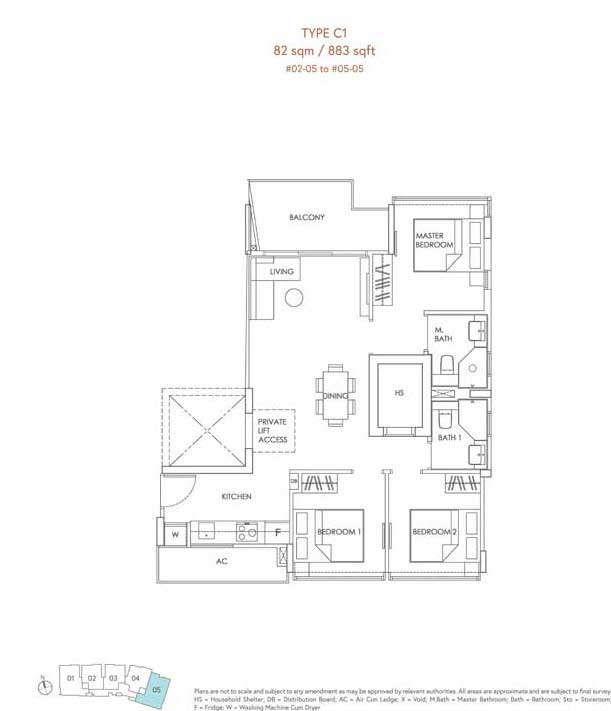 Though Mooi Residences is a small development, the developer spares no effort in providing top of the line fittings, such as Duravit and Grohe, generally found in luxury developments. To give an added touch of class, Jee-O (coincidentally a Dutch product) bathroom accessories are provided.

At this point of writing, the information we received on the price range are:

Currently, the developer is offering up to $164,000 discount for its preview! The average preview price is about $2565psf.

How do these prices compare with nearby new launches in terms of quantum?

In general, the pricing of Mooi Residences is quite in line with recent launches in the Holland/Farrer area.

My Thoughts on Mooi Residences

Bigger developments like Leedon Green, comes with more and bigger facilities which smaller developments can’t afford to have due to space constraint. On the other hand, for many tenants, the proximity to Holland Village outweighs the facilities. And there are many expatriates who prefer the quietness and exclusivity of a small development.

Despite the small size of the development, we must give credit to the developer for providing the best in terms of facilities and finishing.

Besides, all units come with private lifts which is very rare for small 2-bedroom units. The single-loading layout (instead of back-to-back units) is great for ventilation, which again is a rarity these days.

Mooi Residences should appeal to young couples, small families and even retirees who loves the convenience that Holland Village and the MRT provide.

Message me if you would like to have the floor plans. To make an appointment to view the show flats, please register your interest or book a date with me using the calendar below.

Be invited to the VIP Preview
Receive first hand updates on developer’s prices and star buys!

Before becoming a real estate agent, Danny was a full-time church pastor (don’t be shocked!) for 23 years. He is still actively involved in church work and preaches regularly, and he has also made six mission trips to Myanmar to date.

During this pandemic, Danny discovered a new love for hiking. He has covered most of the nature trails in Singapore, including some off the beaten track.

Besides being an avid hiker, Danny is a passionate foodie. His motto is “walk to eat”. During his spare time, he would go with his wife to try different “CNG” (cheap and good) food. (Be sure to check out his Holland food blog on this site).

Do feel free to drop him a Whatsapp message for a non-obligatory discussion if you plan to grow your property wealth.