We often hear the cliché, buying a property is all about location, location and location.

But what are the determining factors of a good location? The traditional favourite areas for home buyers are District 09 (e.g. Orchard), District 10 (e.g. Holland, Bukit Timah), District 11 (e.g. Newton, Novena) and District 15 (e.g. East Coast). The property prices of these areas have grown tremendously over the years because of their popularity.

Has the criteria for a good property location changed over the years? Of course, the proximity to good schools, the accessibility of public transportations and convenience of amenities will always stay. But how about the growth potential of the neighbourhoods, such as the government’s future development plans?

The property landscape of Singapore has changed radically in recent years. To cater to our population growth and quest for a better lifestyle, our city planners have to study and plan continuously for the optimal usage of our limited lands. So every five years, our government releases their Master Plan, which gives us a glimpse of what our future would look like.

The Master Plan is indeed one of the best tools for property investments.

Will the Central Business District (CBD) still be a high-value area in 20 years from now?

Can you ever imagine a non-central neighbourhood having more valuable properties than, say, Orchard or Newton?

We may still be far away from such a future, but it’s definitely not impossible. Singapore is in the process of decentralising, and you can see it in initiatives such as the Jurong Lake District (JLD), Punggol Digital District (PDD), Woodlands Regional Centre (WRC), and Paya Lebar Central (PLC).

The goal is to have multiple hubs across the island, rather than concentrating everything in one CBD. Otherwise, our transport infrastructure is sure to break down (the MRT and roads can’t keep handling millions of people, going in and out the same area at the same times!)

Business hubs will have a positive impact on the property value near them because these areas will create more rental demand, better infrastructure, more recreational facilities and enhanced amenities. So, buying a property near these business hubs will mean a higher potential for capital appreciation and ease of finding tenants.

Where are these business hubs?

Business hubs will have a positive impact on the property value near them because these areas will create more rental demand, better infrastructure, more recreational facilities and enhanced amenities.

In the last decade or so, Jurong has slowly transformed from an industrial area to a vibrant neighbourhood with sprawling malls, new condos, hotel and hospital.

JLD is a 360-hectare area, designated as Singapore’s “second CBD”. At the time it was unveiled (as far back as the URA Master Plan 2008), it stood out for having a “live-in” CBD theme, with lifestyle, entertainment, retail, etc. It was quite different from the existing CBD, which became a bit of a dead town after office hours or on weekends. Today the CBD is being revamped with the same concept though.

JLD is also near to the future Tuas Port, slated to be fully completed by 2040. It will be the world’s largest fully automated terminal.

Here’s how the prices have moved near the JLD area: 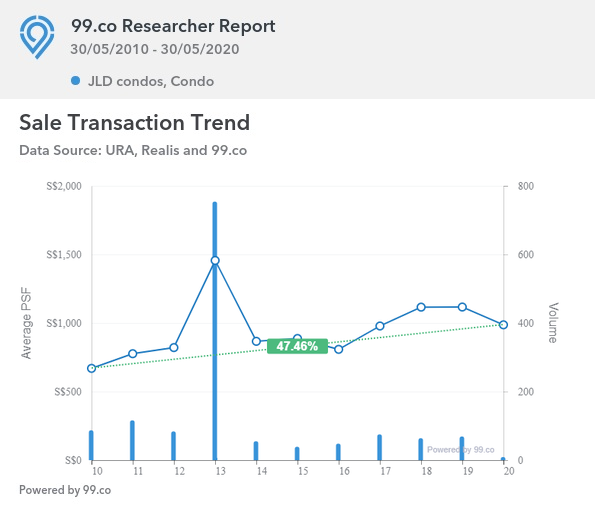 Over 10 years, condo prices in JLD have risen from $669 psf to $987 psf. This is an appreciation of around 47.4 per cent, and condo owners here would have seen annualised returns of about four per cent if they were to sell their properties today.

You may notice that there’s a huge spike that occurred in 2013. This was due to a confluence of two events: first, 2013 was the last peak of the Singapore property market (just before cooling measures kicked in to force prices down).

Second, the spike happened because in February 2013 an agreement was signed between Singapore and Malaysia to build a High Speed Rail (HSR) terminal in the area. Our government then announced Jurong East as the site for the terminus. Sadly, those plans were postponed after some political troubles in Malaysia (but should the project be completed, it will be a big boon for JLD area properties again).

Write to me for my top new condo picks around JLD

One-North is a business park, not a business hub. It’s under the auspices of Jurong Town Council (JTC), which was also responsible for much of the planning and development in JLD (discussed above). Although it’s outside the CBD proper, One-North is only around 10 minutes’ drive to the Raffles Place area.

The One-North business park is part of the R&D, medical and educational hub in the region. Together with Science Park, INSEAD, Essec Business School, National University Hospital (NUH) and National University of Singapore (NUS), they provide a ready high-profile tenant pool for the housings nearby.

Do you know there is another upcoming special-focused district coming up in the vicinity? (Write me for more info)

One-North has the added advantage of being near the lifestyle hotspot of Holland Village, so many of the workers here opt to stay in Holland V for the nightlife and food.

Here’s how prices have moved in the area: 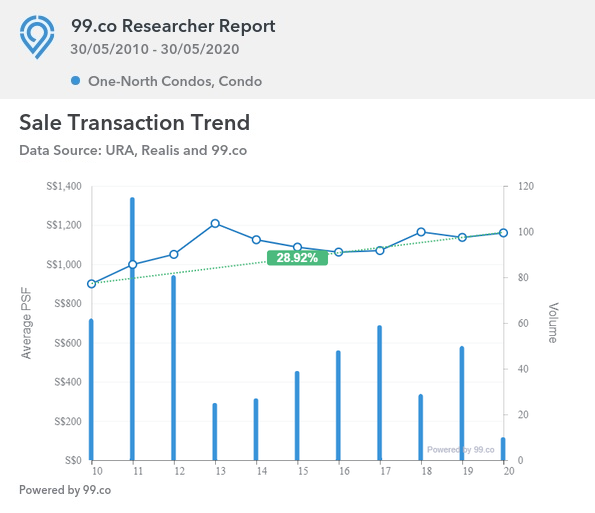 Prices of condos in the general area have risen by around 29 per cent, from an average of $900 psf in 2010 to $1,160 psf today. This is an annualised return of about 2.6 per cent per annum for condo owners in the area.

For One-North, note that there’s been a strong spillover effect to Holland Village; there are relatively few condos near One-North itself, so many of the workers here live or rent in the adjoining Holland V.

Punggol was known as an “ulu” area with affordable housing for many years, although this is now set to turn around.

When the government first unveiled the Punggol 21 initiative in 1996, the plan was to develop this former rural area into a new residential town. Unfortunately, the 1997 Asian Financial Crisis derailed the original plan for a few years. Subsequently, the government introduced a new Punggol 21-plus plan to redevelop the area into a waterfront town. Today, Punggol is a bustling town with an abundance of public, private housings and amenities. 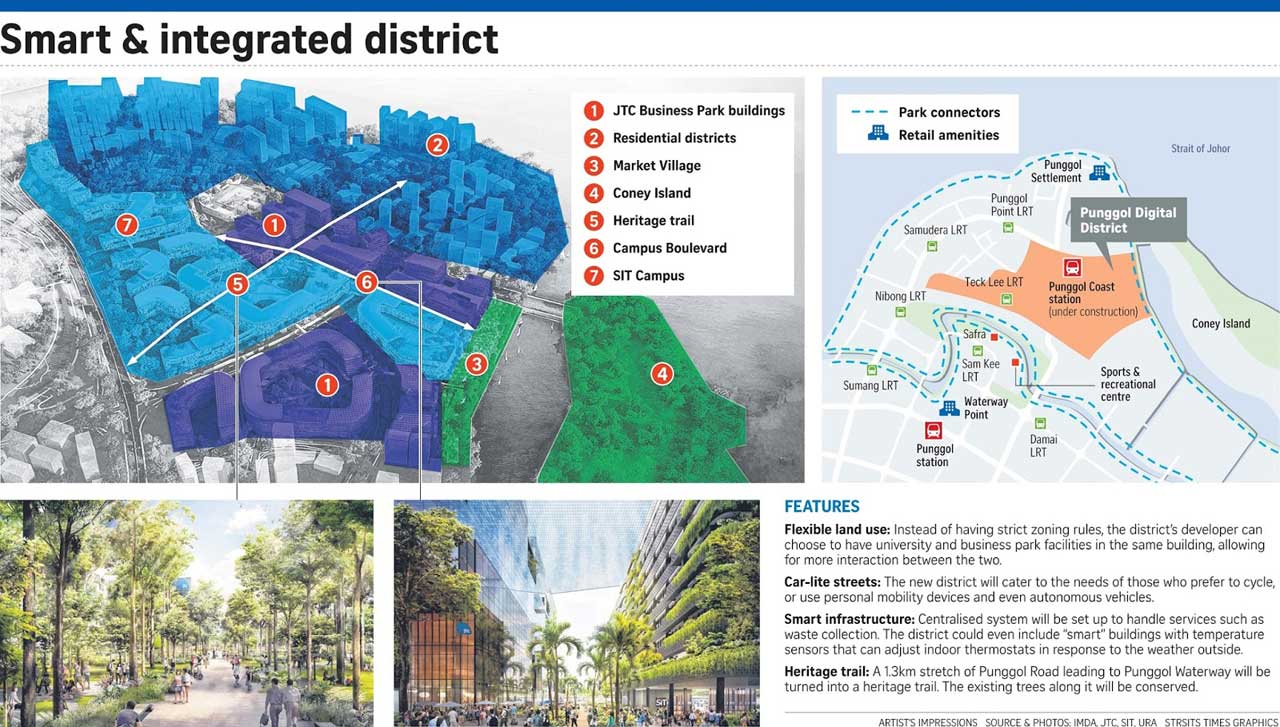 The Punggol Digital District, slated to open in 2023, is destined to become our very own ‘Silicon Valley’. PDD is a business hub in which tech companies and start-ups will be alongside the Singapore Institute of Technology (SIT) campus. It will also feature a market village, and lifestyle bazaar (Nexus) where the Punggol Coast MRT station will be located. The 50ha development will provide 28,000 jobs, together with 12,000 students and more than 50 faculty and professional officers from SIT.

Here’s how prices have moved in this area, with the PDD looming (note: we only have transacted data from 2011 for condos in this area): 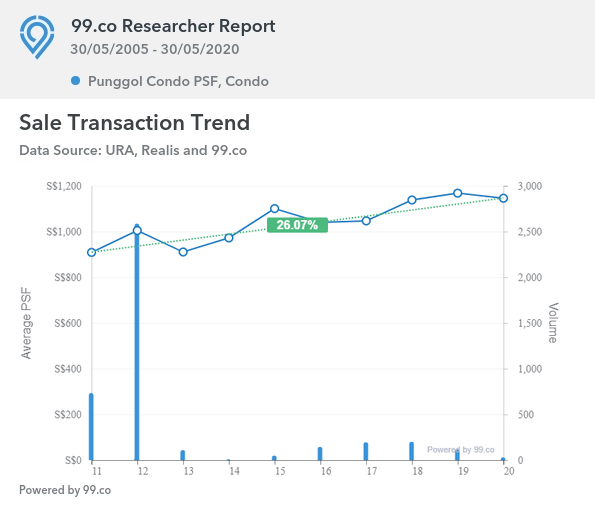 Over the past decade, condo prices in Punggol have risen from just $909 per square foot, to $1,145 per square foot. This is an increase of about 26 per cent, or about 1.8 per cent per annum.

Note that this is early days for Punggol, as the PDD is yet to be developed.

Write to me for my top new condo picks around PDD

The Woodlands Regional Centre will be the largest business hub in the North region of Singapore, over the next decade or so. Apart from being a key connecting point to Johor (which it already is), the WRC will be an Agri-Tech and a Food Corridor. This is where we’ll make the push for sustainable urban farming in our attempt to be less reliant on imported foods.

It will be divided into two main areas: Woodlands Central (which will have more commercial and work-related amenities), and Woodlands North Coast (a roughly 70-hectare patch that’s more dedicated to residential use).

The plans will take a while to come into fruition, but let’s see if prices have moved in expectation: 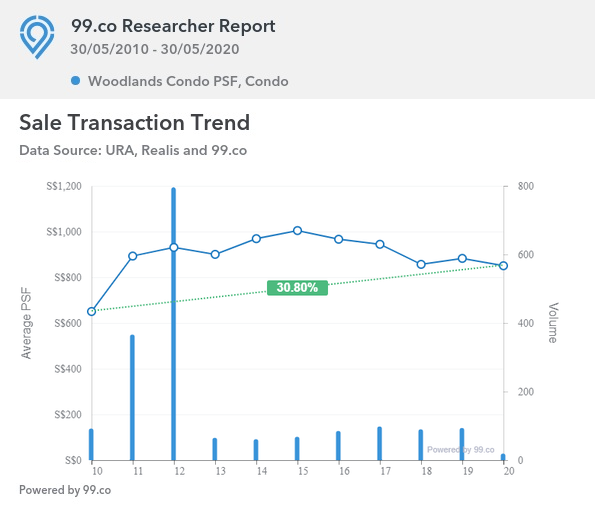 Prices in Woodlands have gone up almost 31 per cent, from $650 psf a decade ago, to about $850 psf today. Most owners would have seen annualised returns of about 2.7 per cent since 2010.

Given that the WRC is still in its early stages, we may be seeing the end of “cheap” Woodlands as developments unfold, and demand increases over the coming decade.

Write to me for my top new condo picks near WRC

Paya Lebar Central, home to Paya Lebar Square, Paya Lebar Quarter (PLQ) and the revamped SingPost Centre, is a key city fringe business hub. Like Jurong, PLC can be said to be in full bloom already. There’s close to one million square feet of grade A office space at PLQ alone, and its three office towers can take up to 10,000 workers at full occupancy.

At present, PLC also stands out for being the most centrally located business hub outside of the downtown area. It’s also noted for being a little more to the east side, which places Changi airport and Changi business park in closer proximity compared to the other business hubs (even the actual CBD). The MRT station here serves the East-West Line and Circle Line.

It is noteworthy that Paya Lebar Central is near to the Paya Lebar Airbase. By 2030, when the airbase is relocated to Changi, it will free up a massive 800ha of land for future developments.

Here’s how prices have moved in PLC: 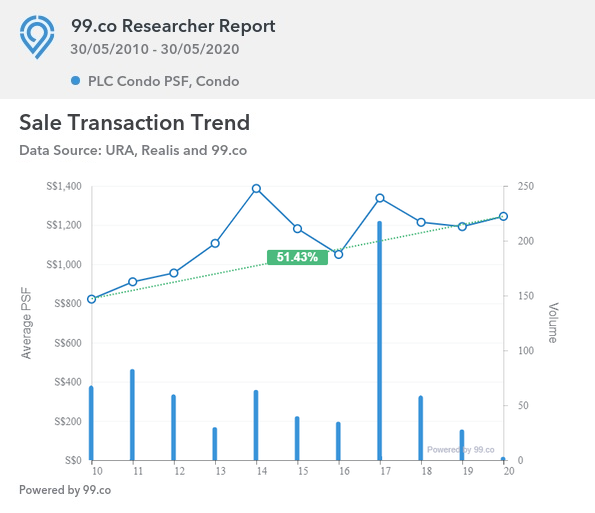 As with JLD, many of the amenities here have been priced into the properties by now. The price per square foot of condos in this area had grown by over 51 per cent in the 10 years, from an average of $822 psf, to $1,244 psf. Property owners who bought in the last decade would have seen returns of over 4.2 per cent per annum.

Write to me for my top new condo picks around PLC

The property scene in Singapore is always changing

One of the most crucial things to take note of is the URA Master Plan, which will spell out developments such as the above. The key to successful property investment is not always to buy in a hotspot; in fact, masterful investors are the ones who buy where the hotspots will be.

Business hubs certainly can present excellent property investment opportunities, but there are other locations with great growth potential that I have not covered. If you are keen to know where are these places, do drop me a message.

Follow me on Facebook, so I can update you on trends and movements in the market. I’m also available to answer any of your questions about specific developments or transaction issues! 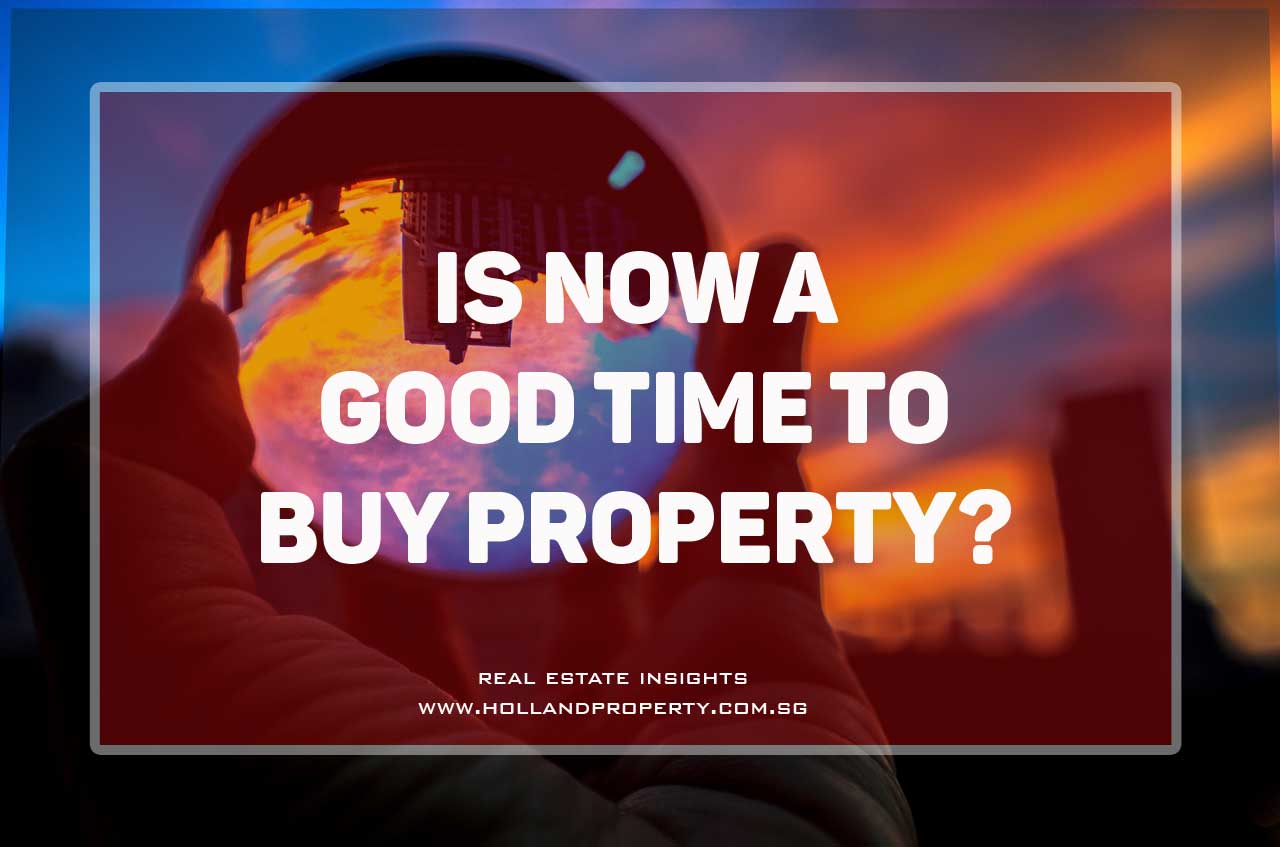 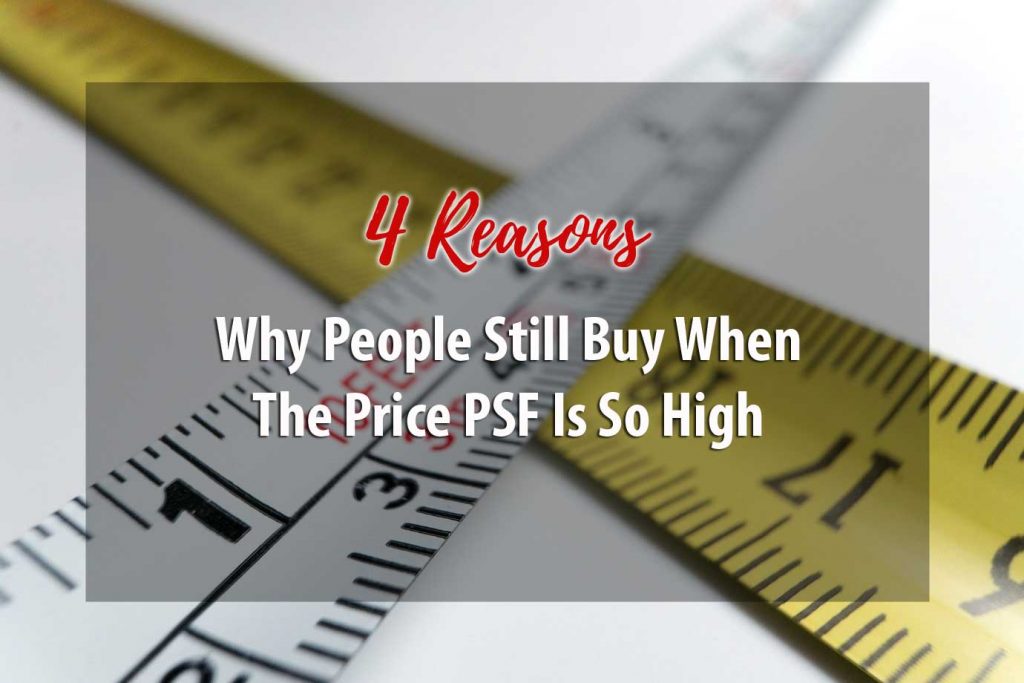 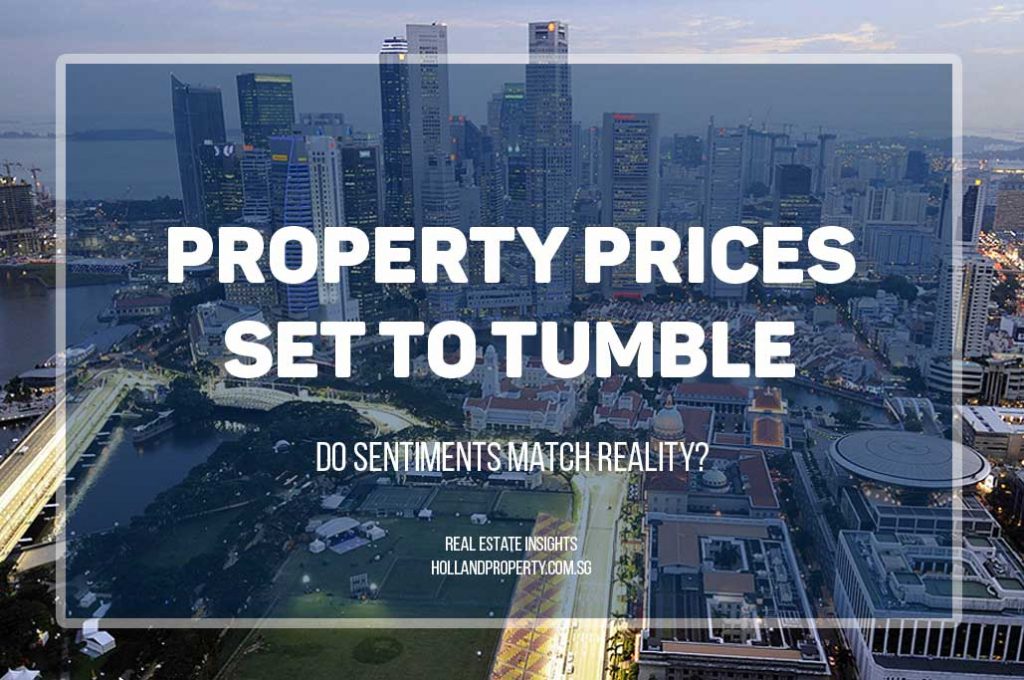